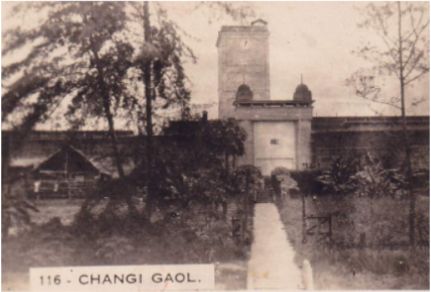 Summoned to a Conference at Changi Gaol on 30th August 1942, the Commander of British and Australian troops at Changi, Colonel Holmes, M. C., and his two area  Commanders, were informed that Japanese Officer, Major General Shimper Fukuye, had issued an order that all Prisoners at Changi would sign an Non Escape Agreement.

When the Imperial Japanese Army representatives were informed that no man in Changi would be prepared to sign such a document, threats of retaliation were issued by the Japanese. This refusal resulted in all Officers and men in Changi, nearly 20,000 British, Australian and Dutch troops being incarcerated in seven three-story Barrack  buildings  each designed to hold 120 men. The total floor area in the buildings, plus the Barrack Square was seven acres.

This refusal resulted in all Officers and men in Changi, nearly 20,000 British, Australian and Dutch troops being incarcerated in seven three-story Barrack  buildings – each designed to hold 120 men. The total floor area in the buildings, plus the Barrack Square was seven acres. After allocating space for nearly 1,000 Hospital and Convalescent Depot seriously ill and crippled patients, food preparation and cooking areas, and trench latrines, the remainder of the space was for the troops to make do. 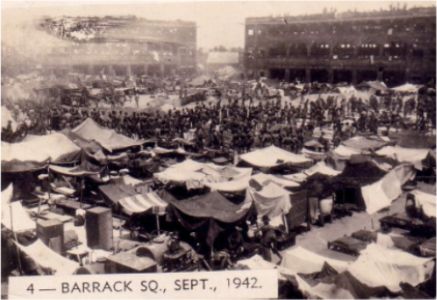 Once in the square, no one was allowed to leave – the area being patrolled by ex-soldiers of the Indian Army.  Much time was spent in queuing for the water ration of two pints per man per day ( one pint of this went to the cooking area for food preparation).  The other queue was for latrine use. This queue was constant as was the digging of the latrines, which covered about one-third of the Parade Ground.

Hygiene became a serious issue, as well as the constant threat of dysentery and other diseases. After two days, the Japanese again ordered all to sign the Non Escape Agreement, or else the present situation would continue until they died.

Two hospital patients died during the first twenty-four hours, and others were nearing their end.  These factors plus the constant threat of disease outbreak forced the Australian Headquarters to advise that anything signed under duress was not binding, and so ordered all to sign the Agreement.

To re-enforce their Non Escape Policy, and in an effort to persuade the troops to sign the Agreement, on 2nd September 1942, the Japanese executed four soldiers, two British and two Australians who had been caught trying to escape.  Both British and Australian Officers were required to witness the execution which was carried out by ex-Indian Troops who had gone over to the Japanese side. Unfortunately, the Indians were not very good shots, and in the case of one Australian took several attempts to kill him.  He died cursing the Indians and the Japanese Army.